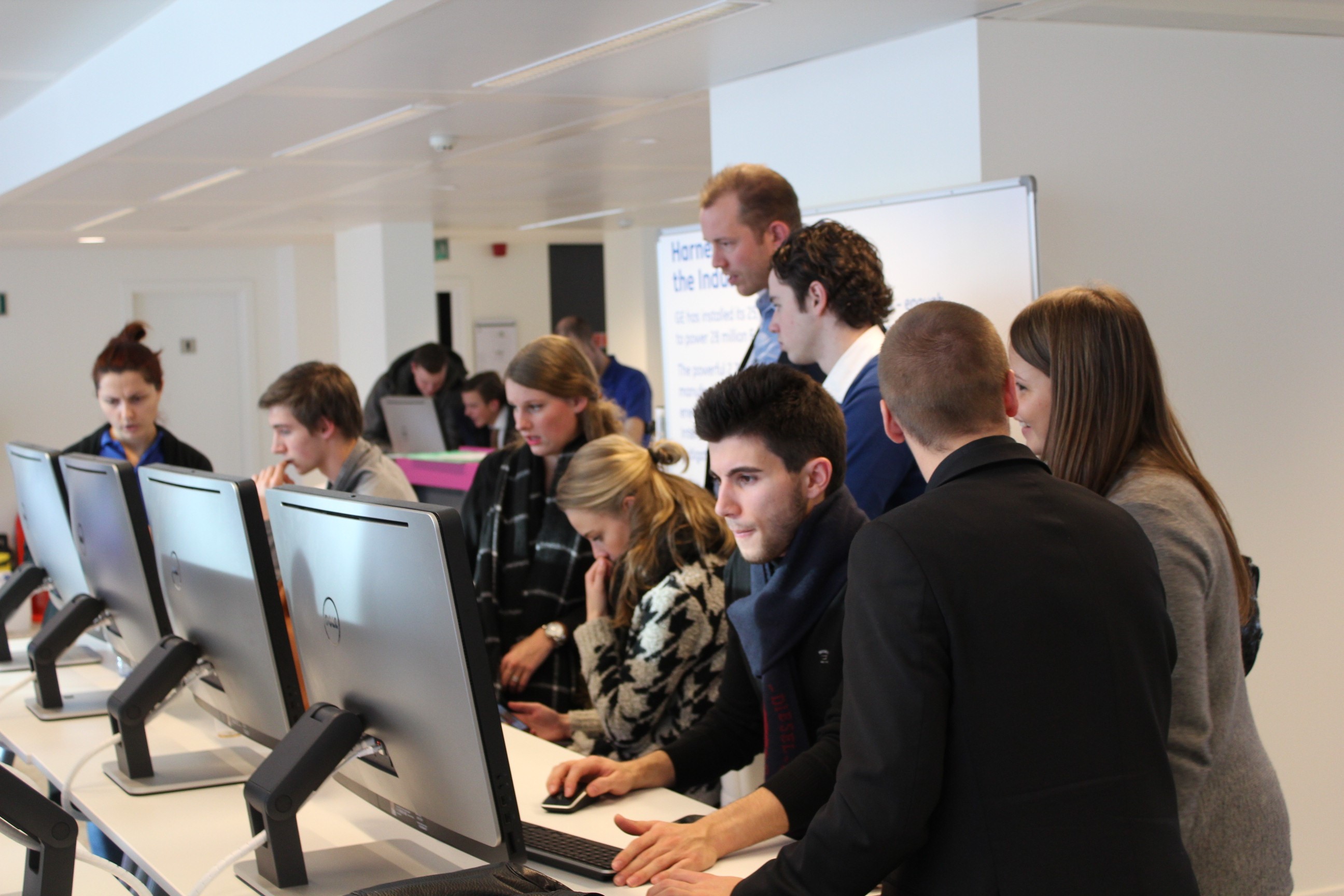 GE (General Electric), one of the world’s leading innovation and technology specialists, opened the doors of the pop-up Garage in Brussels during the first two weeks of December. At a time when there’s a technology revolution unfolding behind the scenes in some industries, this initiative sets out to raise awareness amongst the general public, in particular the younger generation, and spur their interest.

The Garage, a real-deal ecosystem

Following the overwhelming success in other countries, attention turned to the heart of the European district in Brussels where GE set up its first ever pop-up Garage in Europe opening its door for two weeks on December 1st. GE’s Garage acts as an illustration of the new industrial revolution which is currently underway and which promises to drastically change the future of work and the economy in the coming years.

One of the central topics addressed by GE here is advanced manufacturing. The possibility of designing an object with easy-to-use, intuitive software, then creating it yourself within an hour or two using a 3D printer or a lasercutter is now within reach of everyone, young and old, at the pop-up Garage.

In search of passion and talent

GE has created an accessible space for sharing, discovery and discussion, designed to arouse the interest and fascination in everyone, yet its priority target group is the younger generation, starting with primary school pupils.

“Our daily work involves developing innovative and effective solutions in diverse sectors, and we understand the extent to which the talent and vision of our staff are vital to meeting the challenges of tomorrow”, explains Barbara Vermeire, Communications Manager at GE Benelux. “Businesses, irrespective of their area of focus, will need technical people with specific, digital expertise to grow and support the economy in Belgium, and in Europe in general.”

A changing future of work

GE is particularly well placed to raise this issue, given that its own industries are experiencing a metamorphosis as a result of the new technologies. 3D printing offers the chance to produce material that is much lighter, and do so in less time while generating less pollution.

“3D technology of course allows us to produce the same thing in another way, but it also broadens the scope of what is possible by thinking in a totally new way”, says Marco Magli, Head of Media & External Relations at GE Aviation in Italy. “Such techniques are going to change the job market significantly by creating new professions and require new skills, in particular specialist designers and engineers. That will create its own challenges as we try to address the skills gap which we are facing here in Europe”, he adds.

GE’s pop-up Garage is similar to the fablabs, real laboratories for creation and production that have grown rapidly in Belgium over the years and that share this same belief that engaging with the younger generation is vital for the country’s future.

Marc Lambaerts, Manager of Fablab-Leuven, the largest fablab in Belgium and one of the most significant in the world who participate in some activities in the GE Garage said: “The vast majority of schools and universities in Belgium are not able to give students the chance to test lasers, 3D printers or other high-tech devices. The fablabs provide a complementary and different approach to education. And yes, there is clear evidence of demand and interest among young people. We also help start-ups and small businesses get off the ground.”

GE’s Garage is part of GE’s long-term involvement in terms of communicating with and raising awareness among young people of the opportunities which new technologies and innovation present. GE cooperates closely with JA-YE, an international organisation that helps forge links between young people, schools and businesses, with the same aim of shedding light on technologies and preparing people for the job market.

Caroline Jenner, Chief Executive Officer Europe at JA-YE, explains: “In Belgium, two local JA-YE organisations work with local schools and universities to accelerate raising awareness and putting things into action. More than 200 GE staff support our programme and take part in our activities, notably in schools, to talk about new technologies in general and how they are used in practice by GE.”

So strong has the response to the initiative been with over 800 people passing through in the two weeks, that GE’s Garage will re-open to the general public in January (from Monday 19th to Saturday 24th) before embarking on a tour of other major European cities. Details of the opportunities to participate in Garages or attend some of the open events can be found on www.gegarages.eu.

GE (NYSE: GE) focuses on what matters. Taking on tomorrow’s biggest challenges using the talents of our staff and our advanced technologies. Inventing innovative solutions in energy, health, transport and finance. Building a sustainable, safer and more mobile world and powering it with energy. GE doesn’t just think about the future, it creates it. For more information, visit: www.ge.com.

GE launched the GE Garage concept in March 2012 in the United States in a bid to revive the general public’s interest in invention, innovation and production. Running projects, holding discussions and round-tables, and hosting workshops on 3D printing, laser cutting, injection moulding and CNC milling are at the heart of this initiative. Those taking part can engage with experts, learn more about production processes and turn their dreams into reality by testing the machines themselves. Today, the GE Garage is on the move around the world, and in December 2014 set up shop in Europe for the first time, in Brussels. Further information can be found at: www.gegarages.eu.

A fablab (“fabrication laboratory”) is a place that’s open to the public, in particular businesses and students, where all manner of tools and machines are made available for designing and producing objects. In Belgium, 9 fablabs have the same desire to share and innovate, each with its own vision and area of focus: Brussels (Fablab Brussels and Fablab iMAL); Courtrai (BUDA); Genk (Fablab Genk); Leuven (Fablab-Leuven); Louvain-la-Neuve (MAKILAB); Liège (RElab); and Ghent (Timelab). For more information, visit: www.fablabs.io and www.fabfoundation.org.

JA-YE Europe, the largest European organisation providing entrepreneurship education programmes, aims to inspire and prepare young people for success in tomorrow’s world of work. In 2013, JA-YE reached 3.2 million students in 39 countries. Funded by businesses, institutions, foundations and individuals worldwide, JA-YE looks to bring the public and private sectors together to provide information to young people in primary and secondary schools. With 200 of its staff involved in this programme, GE is a key partner for JA-YE. More information can be found at: ja-ye.org.

You can also visit www.thingiverse.com to see collections of current 3D creations and www.tinkercad.com to create your own object that can be printed in 3D.