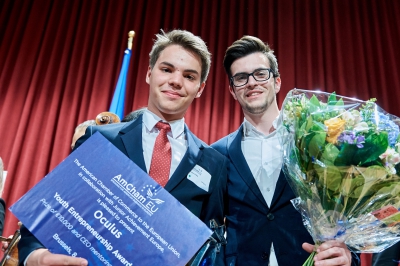 The American Chamber of Commerce to the European Union (AmCham EU) and Junior Achievement Europe (JA Europe) are delighted to announce that Oculus, a Romanian start-up, is the winner of the fifth AmCham EU Youth Entrepreneurship Award. Oculus developed the Mitra Glasses, a device that provides essential aid and safety to visually impaired people during movement, using incorporated sensors and efficient algorithms.

The AmCham EU Youth Entrepreneurship Award, organised in collaboration with JA Europe, aims to showcase young people with entrepreneurial talent. It is a symbol of American companies’ support for jobs, growth and innovation as well as their commitment to the prosperity of Europe.

The jury was particularly impressed by the way the start-up combines technology with social purpose. Other finalists included Couch from Portugal, Key Butler from Norway, Saluv Phone from Switzerland and Socialsharks from the Czech Republic.

Tudor Popa, CEO & Developer, Oculus, stated: ‘This award will change the course of our project. More importantly, it will help us get the Mitra Glasses much quicker to the market to reach those who need it the most.’ As part of the award, the start-up will also receive significant mentorship from a number of European CEOs from AmCham EU’s Executive Council. ‘The mentorship is a fantastic opportunity for us. We are still young – only eighteen – and we will be able to learn from some of the world’s most experienced business leaders’, Tudor Popa added.

Susan Danger, CEO, AmCham EU, said: ‘We are proud to support young and talented Europeans such as Oculus. They demonstrate the creativity, drive and positive mindset that are key to success.’ She added: ‘For the EU to remain competitive in a globalised world, it is crucial for policy-makers to encourage entrepreneurship and innovation. They are the drivers of the European economy.’

Caroline Jenner, CEO, JA Europe, shared: ‘For the fifth year already, JA Europe is organising the Youth Entrepreneurship Award in partnership with AmCham EU. Through this collaboration, we are committed to equipping more young people with the skills they need to become successful entrepreneurs like Oculus and whose participation in the JA Company Programme showcases the impact it can have on later careers.’

About AmCham EU
AmCham EU speaks for American companies committed to Europe on trade, investment and competitiveness issues. It aims to ensure a growth-orientated business and investment climate in Europe. AmCham EU facilitates the resolution of transatlantic issues that impact business and plays a role in creating better understanding of EU and US positions on business matters. Aggregate US investment in Europe totalled more than €2 trillion in 2016, directly supports more than 4.5 million jobs in Europe, and generates billions of euros annually in income, trade and research and development.


About JA Europe
JA Europe (www.jaeurope.org) is Europe’s largest provider of education programmes for entrepreneurship, work readiness and financial literacy, reaching 3.5 million students in 40 countries in 2016. It was founded in 2001 when Young Enterprise Europe and Junior Achievement International Europe merged. JA works with the education and business communities as well as governments to provide young people from primary school to university with experiences that build the skills and competences they will need to succeed in a global economy. JA’s activities have been endorsed as best practice by the European Commission. JA Europe is the European Regional Operating Centre for JA Worldwide®.