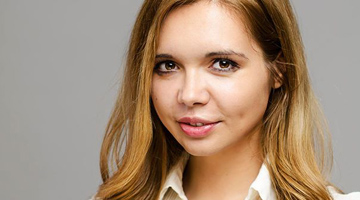 "As a female entrepreneur, I believe that support and information are one of the most important gifts that someone can receive when they start on the business journey. JA offered me these two precious things that put me on an international and amazing path where I succeeded to learn life-long lessons and to fully live my dreams."

Four years ago Claudia started her first company which provided educational courses, camps and events for children aged 5 to 13.

She is currently the founder and creative director of Kidster, a company that offers educational programs for children, with activities in Bucharest and Pitesti.

She also founded her second start up, tortulet.ro, an online cake shop. Lately she has also been the producer of the show "KIDster of the Week" on Youtube.

In 2015 Claudia received the prestigious Young Leonardo Award in the category Trans-Generational Learning.

Claudia is a member of the community Restart in Education Romania, and in June 2012 she appeared on “Lions Arena”, an entrepreneurial TV show, broadcast on TVR 2, where she obtained an investment of 15,000 euros for NextSteve Group Company.

In November 2013 Claudia provided the first child educational scholarship for the Academy “Juniors in Business” during the show "Cherish Life" (TVR 1). This year, her company, KIDster, gave another scholarship to an 11-year-old boy at the course “Photoshop for Juniors”.

In addition, she has a rich experience as a participant, organizer and speaker in trainings or events on subjects such as entrepreneurship or education. She was a two time speaker at TEDx conferences: TEDxPiataSfatului, Brasov, June 2012 and TEDxPiatraNeamt, May 2014.

Because of her work, positive attitude, courage and creativity, Claudia is recognised and seen by many as one of the new Romanian young leaders.