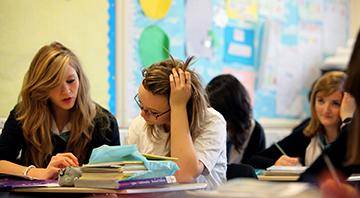 Entrepreneurs are in demand. Arguably, there has never been a greater need for creative individuals with new ideas and business models who can help modern society to tackle its greatest challenges, including those related to achieving sustainability.

However, young talents face obstacles. First, the education system in the UK and other countries might be stifling rather than encouraging the creative thinking that underlies innovation. A 2013 survey carried out by software group Adobe found that only 37% of British teachers agreed with the statement that “infusing creativity in education” was important to long-term success, even though 67% agreed that “fostering creativity in education today will fuel the economies of the future”.

The main barriers faced by UK teachers who want to encourage creativity and innovation, according to the Adobe survey, are lack of resources and a curriculum that does not value creativity. In addition, the survey found a belief among teachers that stimulating creativity is someone else's job – it is not a priority for schools.

Business and government are increasingly taking issue with this. In an essay for An Entrepreneurs’ Manifesto, published in October 2014 by the Entrepreneurs’ Network, part of thinktank the Adam Smith Institute, Conservative MP Adam Afriyie writes that entrepreneurship is stifled because “most children go through school without ever coming into contact with business or enterprise, let alone having a chance to run their own company”.

The entrepreneurial instincts of pupils could be fostered, Afriyie argues, by giving schoolchildren the opportunity to start their own businesses. Although entrepreneurship has not yet made it on to the UK national curriculum, schemes to promote it are running. In the UK, for example, the charity Young Enterprise works with schools to teach business skills, including through a programme under which 15-19-year-olds can set up social enterprises.

Business backs such initiatives. Visa Europe, along with other companies such as Barclays, Intel and Microsoft, is partnering a new European entrepreneurship scheme for 15-19-year-olds, which will complement programmes such as those promoted by Young Enterprise. The scheme, the Entrepreneurial Skills Pass (ESP), was launched at the European Parliament in March. Nick Jones, head of corporate responsibility and digital communications at Visa Europe, says: “Entrepreneur skills are not for an elite. They are applicable to all forms of business, be it private, public or third sector. They'll help create business value and social value.”

The ESP is overseen by JA-YE Europe, a non-profit association that promotes entrepreneurship education. Spokeswoman Marie Hargitt says that 26 European countries including the UK currently participate in the ESP, which involves students setting up and running mini-businesses over the course of an academic year. The programme also teaches participants financial literacy and seeks to demystify the start-up process.

Hargitt says the ESP is supported by national education ministries and functions with the assistance of volunteers from companies, who help to guide the small companies established by pupils. These are “real companies that trade in the real world”, Hargitt adds. The culmination of the experience for pupils is an online exam and the award of the Entrepreneurial Skills Pass. In the UK, the scheme will be tested in a limited way in 2015, with 75 pupils taking part, mainly in Hackney and Tower Hamlets in London.

Jones says the scheme is “seeking out ways to increase visibility, further endorsement and support”. It will be judged a success if “students are proud to have it on their CVs and employers recognise it as a standard”. But if the scheme is really successful, perhaps young entrepreneurs will be more interested in creating start-ups and challenging existing companies, rather than seeking to work for them.

Information on the ESP is available at http://entrepreneurialskillspass.eu

This article was originally published on Ethical Corporation (www.ethicalcorp.com) on 8 April 2015.