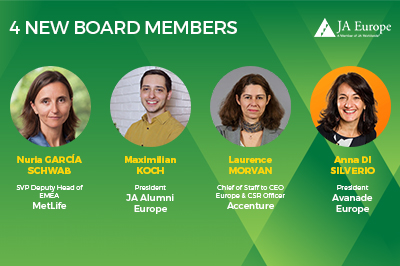 JA Europe appoints four new members to its Board

Nuria is originally from Oviedo, a small town in the  north of Spain. She attended university at her home town and also studied in Hull (UK) and graduating in Economics and Business Administration. She then obtained a MBA degree from Deusto University, Spain, and a master in Finance Engineering from EM Lyon, France.

She began her professional career at SocGen in Paris as a Corporate Finance analyst and then joined GE where she spent 15 years working for GE Healthcare, CNBC and GE Money Bank between London and Paris. She held roles in Financial Planning & Analysis, Treasury, Risk, Salesforce Effectiveness, Insurance, Marketing, Business Development and Direct to Consumer. She has also been Paris GE Women’s Network leader, a role that she particularly cherished as she enjoyed fostering the professional development of women in her hub.

In April 2013 Nuria joined MetLife as the Head of Marketing, Communication and Direct Sales. Leading a team of 120 people between Paris and Morocco, her main challenges were to renew with growth and diversify the exiting model, also developing the product offer and MetLife France’s brand as a leader in protection.

In January 2015 she took the responsibility of the Direct to Consumer distribution channel for the newly created Western&Central Europe and subsequently she was appointed Chief Distribution Officer for Europe. In January 2019 she was additionally appointed as Chief Operating Officer for MetLife Europe until her current position, from April 2020.

Nuria speaks Spanish, fluent English and French and she has quite a good level of proficiency in Italian. She enjoys playing piano, practicing all sorts of outdoors sports and loves reading. Her biggest passion remains her family: her French husband, her two teenagers Elena 18 and David 16, and her beautiful dog.

Anna Di Silverio, president of Avanade Europe, is responsible for guiding strategy, business operations, talent development, sales and delivery across 15 geographies in Europe. Anna has a deep commitment to building a diverse and inclusive workforce, supporting our collaborative partnership with Accenture and Microsoft, and providing our clients with innovative digital and cloud services, business solutions and design-led experiences within the Microsoft ecosystem.

Prior to her current role, Anna served as president of Avanade Growth Markets, where she was responsible for business operations in Australia, Brazil, Greater China, Japan, Malaysia and Singapore. Under her leadership, Growth Markets experienced consistent double-digit sales, revenue, and headcount growth, and regions in Growth Markets were recognised for gender equality and progressive workplace practices. Earlier she was Growth Markets’ chief operating officer, responsible for executing Avanade’s strategy and operational excellence across its regions in Asia Pacific and Brazil.

Anna joined Avanade in 2010 as general manager of Avanade Italy. She began her career as a networking architecture researcher and holds a degree in computer sciences from the University of Pisa. When she is not working, she enjoys horticulture, tennis and books on technology and gender gap issues.

Maxi is leading his family-owned roofing business “Koch | Dach & Terrasse” in Vienna, Austria together with his father. Leading creative projects from ideation to execution and working as a project-based freelancer is what you will find him doing, when he is not evolving and growing his construction company.

He is a passionate JA ambassador and voluntarily dedicates his time to the European JA alumni network since 2015. Maxi started in the Austrian alumni board as communications manager in 2016 and led the marketing campaign and overall communications on the first JA Global Alumni Conference 2019. He supported JA Worldwide during various of their global events and campaigns as marketing and production lead - such as the Global Leadership Conference 2019 in Berlin. Together with a task force of the European alumni board he led and executed the marketing campaign around the global launch of the online alumni network “Gather” in February 2020.

As of September 2020, he was elected by the representatives of the 23 member countries of JA Alumni Europe as President of the network.

Laurence has management oversight of Accenture Corporate Citizenship activities, which are focused on advancing Accenture’s digital responsibility with programs around skilling for the digital age and innovating for society, as well as embedding societal responsibility around reskilling and technology use in Accenture activities. Laurence represents Accenture at external forum around topics related to entrepreneurship, future of work and business responsibility. She is a member of the Board of Citizen Entrepreneurs, an NGO that fosters entrepreneurship in France. She is the executive sponsor for Accenture's participation to OECD/ Business for Inclusive Growth, to the G20 business fora (B20, W20, G20 Young Entrepreneur Alliance…), which bring thought leadership and business policy recommendations to the G20 heads of state, with a focus on entrepreneurship, future of skills, women in business and innovation. As Chief of Staff to Accenture CEO Europe, Laurence is developing Accenture approach to strengthen Accenture presence in Europe, more fully leveraging the EU strategies and funding. Prior to assuming her current role, Laurence was the Chief of Staff to Accenture CEOs Pierre Nanterme and David Rowland, where she focused on culture transformation, supporting the shift toward innovation and new consulting methods, change management and journey management. Laurence started her career at Accenture as a consultant in the Strategy practice, working primarily for Financial Services clients in France and the United Kingdom. She held a number of internal strategy positions and contributed to the Accenture Human Capital Strategy.

Prior to joining Accenture in 1994, Laurence worked in investment banking on mergers and acquisitions and corporate finance transactions.

Laurence holds an MBA from the Wharton School, University of Pennsylvania, and a MS degree in management from ESSEC business school in Paris.

Nuria García Schwab expressed to be "delighted to join JA Europe's Board and looks forward to developing our long-standing partnership in the region. Last year, through our LifeChanger initiative with JA, volunteers from 14 European MetLife markets volunteered almost 4,400 hours to build the financial  literacy, work readiness and entrepreneurial skills and education of young people. This is life-changing work that we plan to continue".

Anna di Silverio said upon her appointment to the Board that she is "honoured to become a member of Junior Achievement Europe's Board of Directors". She is "passionate about technology and innovation and looking forward to work with JA Europe to develop the skills of young people for the digital future and equip them to build a better world".

Maximilian Koch felt "grateful and thrilled to be accepted into JA Europe's Board of Directors, representing the growing movement of the JA alumni network across Europe and amplifying the voice of the youth and future change makers on the Board".

Laurence Morvan agreed that "preparing young people to thrive in the digital era is an imperative. Junior Achievement Europe, a long standing partner of Accenture, inspires them to be entrepreneurs and gives them tools to be job-ready". She is also "very proud to join JA Europe's Board to help amplify collaboration and impact across Europe".